A downloadable Fun New School Plus for Windows and macOS

Baldi's Fun New School Plus is the currently under development sequel to Baldi's Fun New School. The final version is planned to have features such as More Levels, New Characters, Better Settings, Multiple Endings, Random Events, Improvements, and more. At the moment, Alpha versions are available, which include some of the features, although not all. Later versions will add these features over time. As the mod gets closer to 1.0, new things and improvements will be added, and when the final version comes out, which is planned for Summer 2020, it should have a lot content-wise! Also, keep in mind this is still under development, so you might encounter bugs or glitches.

About Baldi's Fun New School Plus

In this game, you must collect notebooks while avoiding Baldi. At first, things might seem normal, but once you answer wrong, Baldi will start coming after you! Not only do you have to worry about Baldi, but also his friends! You'll see some familiar faces, along with new ones! His friends can either help or hinder your progress as you explore the levels, looking for all the notebooks. Items are also scattered around, which can slow down Baldi and his friends, or help you get away from them. In each level you must collect all the notebooks before you can leave the school. As you progress in Experience Mode, you'll discover not everything is as it seems...

In the final version, there are planned to be a total of 6 main game modes, some of which will consist of multiple playable modes. The planned modes are...

Experience Mode:  Play through increasingly difficult levels to win! As you progress, the levels will increase in size, character amount, and difficulty!

Chosen Mode: Each time you play, a different level will be selected! Each level will have different characters, items, and scenery!

Infinite Mode: Collect as many notebooks as possible and test your skill in a somewhat challenging level.

Challenge Mode: Test your skill in unique and interesting challenges! In one challenge, you might be floating around with a balloon. In another, the school might of turned into a dense forest, with trees everywhere!

Trip Mode: Play several field trips with Baldi! Try winning four randomly selected field trips in a row, or try out each one individually and see how good you are!

And Ultimate Mode: You need to collect 18 notebooks in a giant school while avoiding Baldi and 9 other characters. Items will be harder to find, and Random Events might happen faster and/or last longer.

Besides game modes, many features are also planned in the final version. Some of these are:

New Characters - Besides Baldi and the original cast, there will also be new characters, such as Clocker, King Of Doors, Tomnado, and others!

Improved Level Design - While The Level Design In Baldi's Fun New School was good, it wasn't great, and many improvements could of been added. In Baldi's Fun New School Plus however, levels will have better design, such as different floor textures depending on the type of room, new structures such as rotohalls, fountains, and merry-go-rounds, and more!

Links to content relating to Baldi's Fun New School Plus can be visited below:

Can I Make Mods Of This?

Yes, you can! Just make sure to give me credit for the original mod and you should be good. I'm looking forward to seeing what mods people make with this!

Well, that depends. From all of the suggestions I've got, only some have been added so far. When submitting an idea, it should be good, as the best ones are generally added first.

For Those Who Want To Contribute

I know there are people out there who like contributing ideas for my mods, so I've made an easy way to do so! Just go to one of the links below, and submit your idea! Some submitted ideas have already been added, and more are planned. Also, submissions must be appropriate and not already used.

Baldi's Fun New School Plus will greatly expand upon the original mod with many new additions and features. Also, thanks to everyone who's played and given me ideas so far! Without all of you, I couldn't of gotten this far! More Info Can Be Found Here (Outdated): https://drive.google.com/file/d/17d5IG9gNJO3ulxI7aiRaXQnWACgV6c_a/view?usp=shari...

Download the desired .zip file for your platform. If you don't have a .zip file extraction program, download 7zip or WinRAR. The files should already be in a folder when you extract it. Enjoy playing! Note: If your downloading the BFNS+ OS Project version, you need Unity 2018.3.9f1 to open the project's files. To enable shadows, you need to go to "Options" and then set the Quality to "2018".

All previously released BFNS+ versions are now back! You can find out more here: https://johnsterspacegames.itch.io/baldis-fun-new-school-plus/devlog/180005/old-... 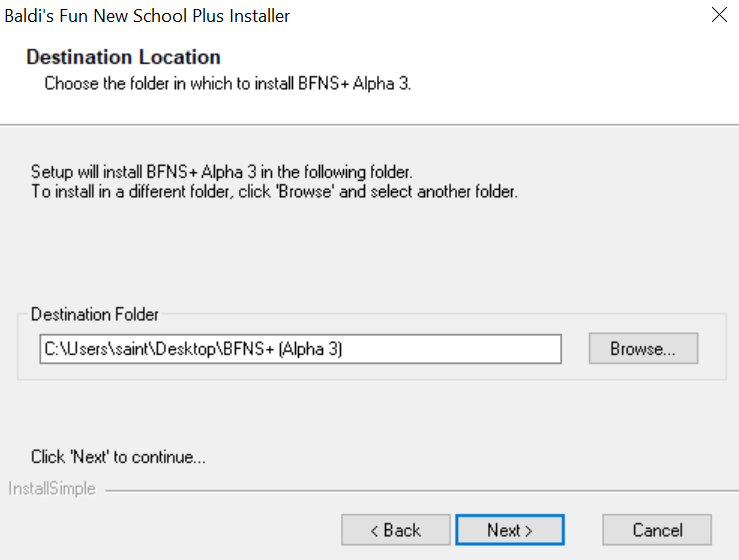 @JohnsterSpaceGames Hey Man What's up can you join me In robloxs later tonight? 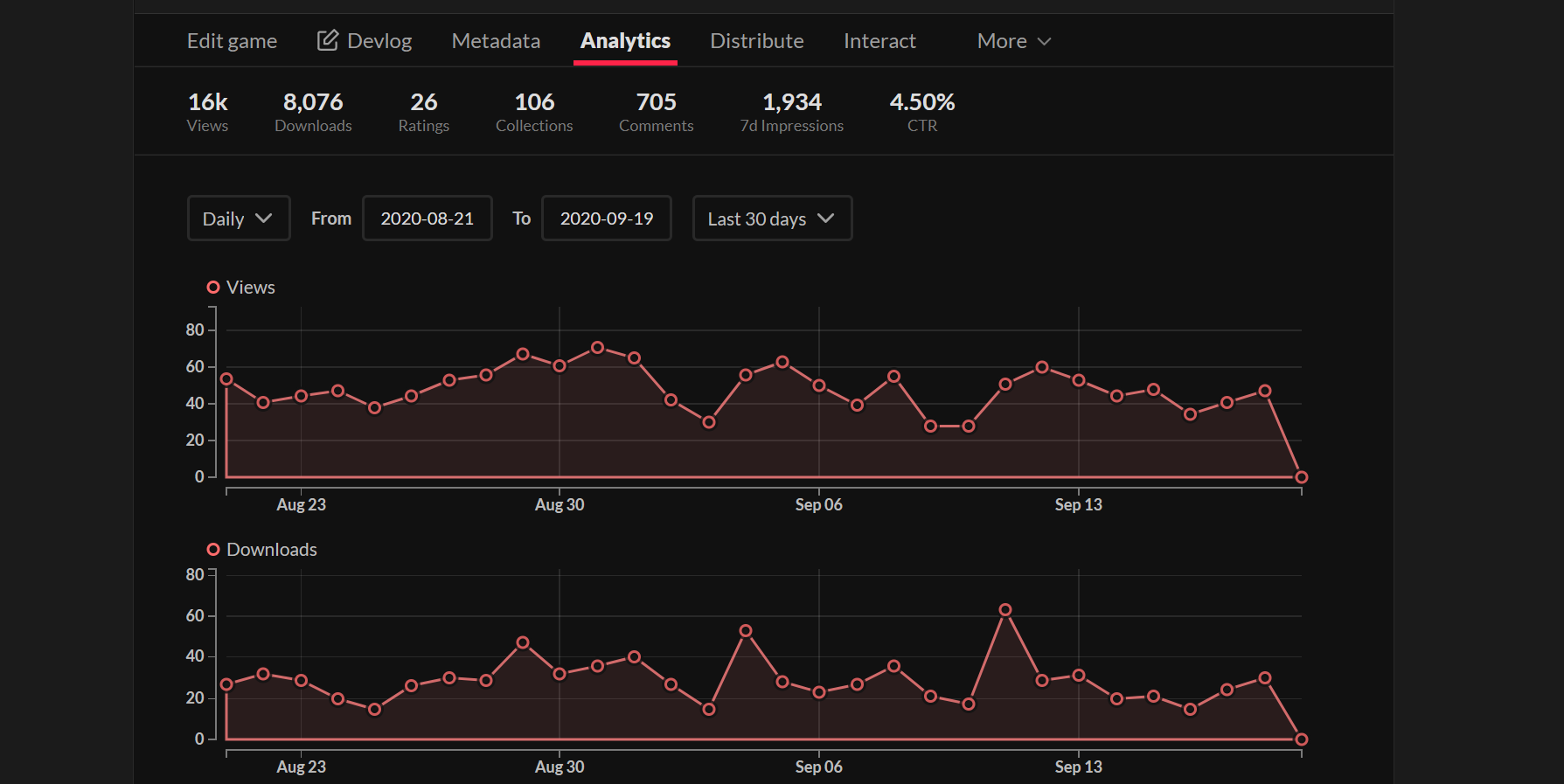 BFNS+ has now reached a total of over 16,000 views and 8,000 downloads on itch.io alone! Thanks again for the continued support of the project, which more people have downloaded and played than I could of imagined! To celebrate this milestone, I will be bringing back every previously released version of BFNS+ as well as some development versions of alpha 1 and 4 which were never publicly released in a file that will contain installers for each version. It will be the first test of using a new installation method, which will hopefully be used in future releases of the mod.

that's nice but can you make alpha 6?

Uhh where is alpha 6? Did you cancel it?

Actually, he already has. It's under the name: "BFNS+ OS Project (Alpha 5)

Hey, is this still being worked on?

LikeReply
baldi basics plus66 days ago(+1) 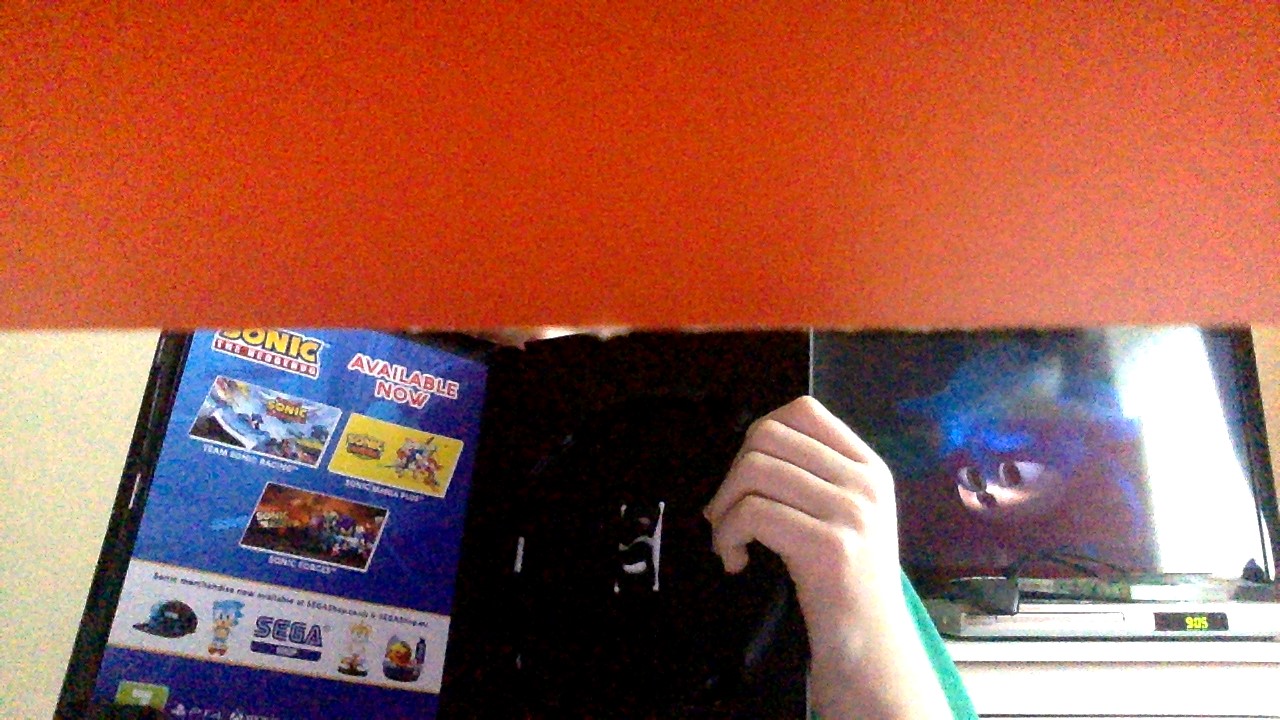 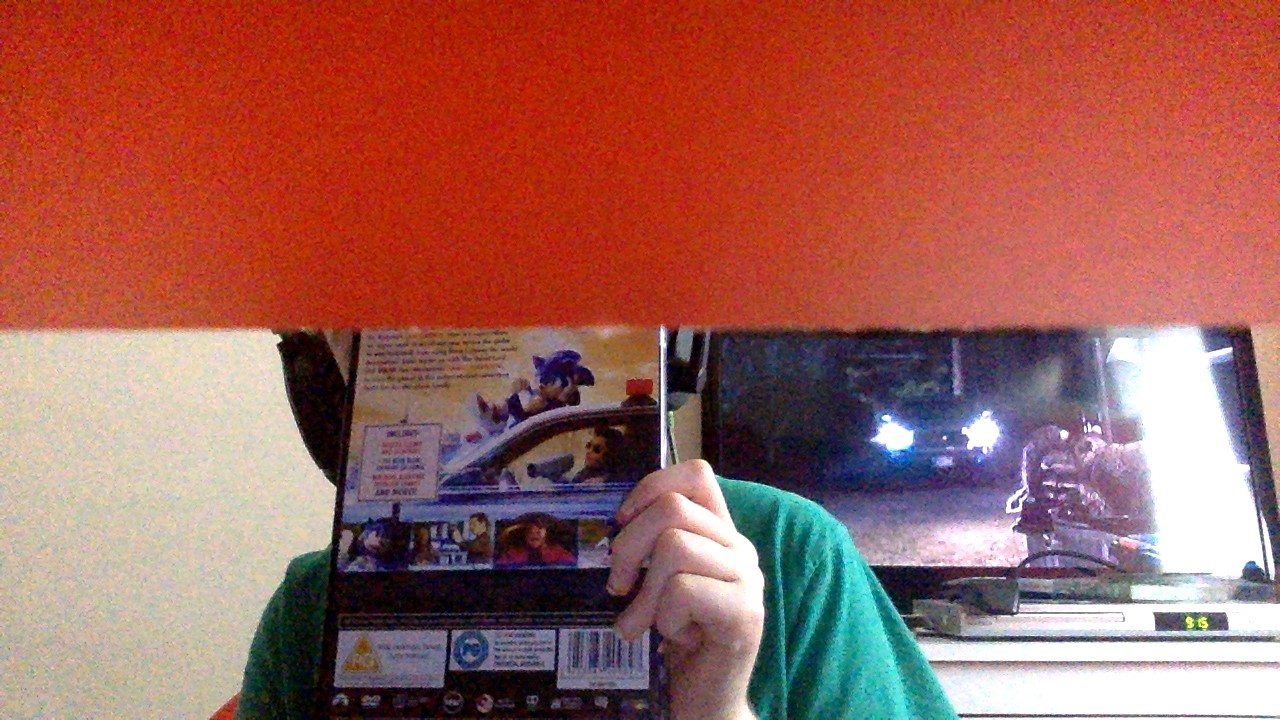 I faanliy got  the sonic dvd

I send to you my character to Field Trip (Stick Machine), i also made the audios, but i can't send with the sprites, so i'll place here:

If you already used she:

When she starts to move:

When she give to you the Sticks:

Are You Going Do To Alpha 6 Or Not?

In Alpha 6, The Test has to make the school bright again. It's what he's supposed to do.

You copied the Description of the BB+ Devlog

why did you copy also there is no mystery room in Baldi's fun new school + or any event.

Is this still being worked on or no? 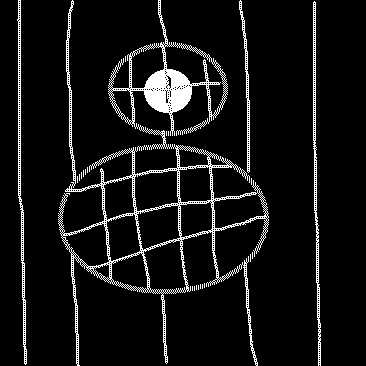 Hey there! I submitted two characters for your mod: Mr. Pop and Boomer (they have the name JayD where it asks for the username, since I just created this account today). I was hoping you would be able to use at least one of them in your mod at some point?

Also, I put up the sprites for my characters if anyone's curious. 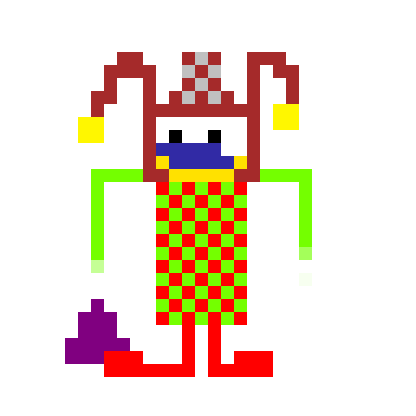 Hi! I have question, android version will be added in alpha 6 or not?

why do you want them on Android?

it is impossible because there is a character who does not let me see why he turns off the lights. and the rotating curve of the corridor has no button to activate can you create a room with the button to activate?

Could you Port thus Game to Android?

How did you made Level Customator?

l'm playing this and l'm really comfused, and l wanna make it to Stencyl (to my BBFMD game) and l don't know how.

hey JSP, Can We Be Friends? :O

oh  sorry the  guy you knew is gone.

Yep also a stupid asshole who still blocked me. 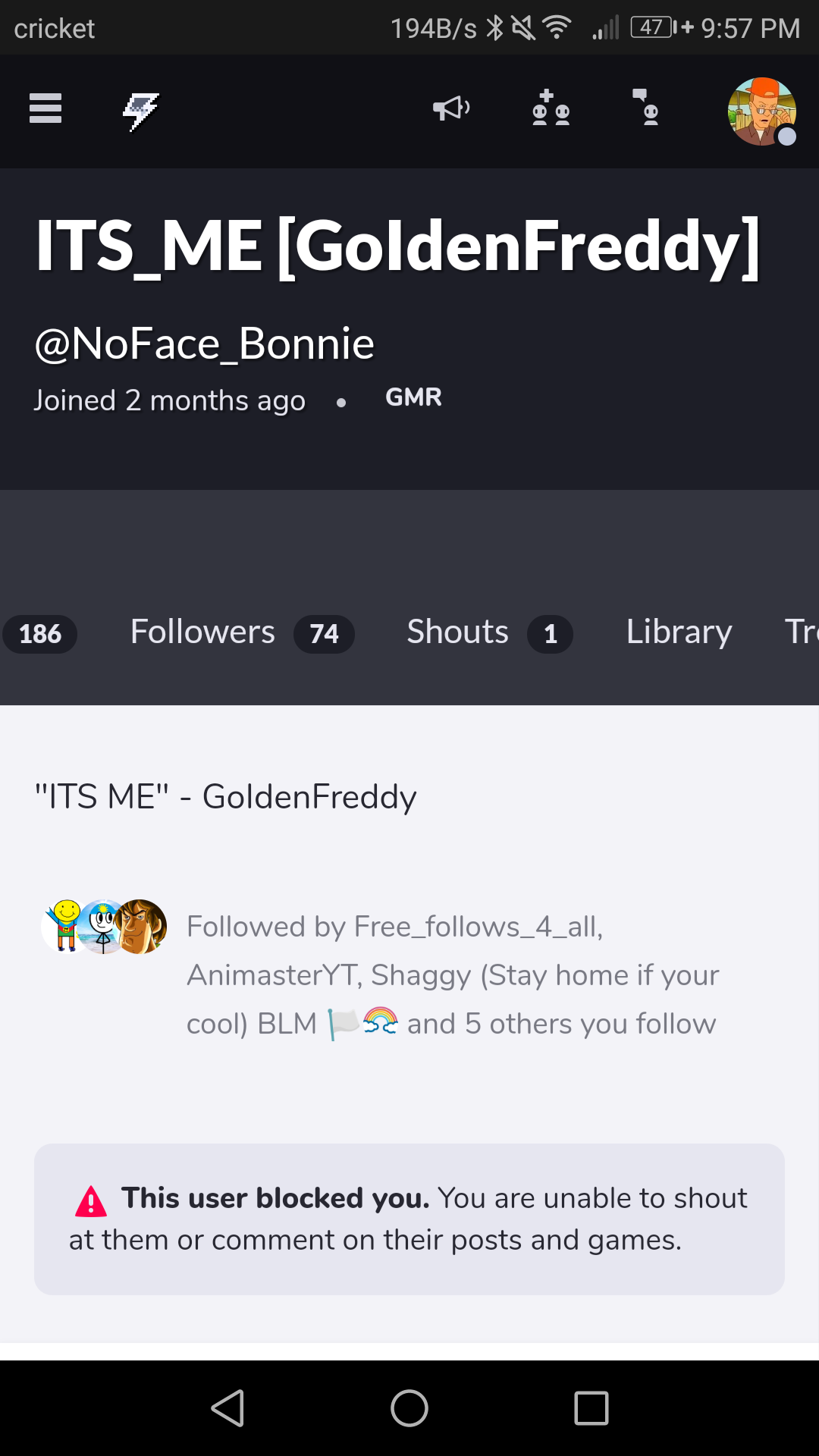 LikeReply
ddanielslurp is mario119 days ago

That's Why he's a CS124 Fan, That he Blocked you for that Cotepus

but he blocked me because, I was saying harsh things to his friend (I already apologised him with my 3rd account).

LikeReply
ddanielslurp is mario117 days ago(+1)

For alpha 5, I'm planning on releasing a few minor updates, mainly to improve things and add to the level customizer.

Same with mine, I really want to see Boomer in the game :-P

jsp are you going to continue bfns+ 2 years modding anniversary edition? and if you are going, how we get the true ending?

yes, I do plan on returning to work on the 2 year modding anniversary edition. And the way to get the true ending is by typing the letters TRUTH in order on the achievements screen. The true ending is currently a placeholder, but I plan on adding a lot more to it in an update.

So, after looking at some challenge submissions, these are the ones I'm planning on adding first: Night Lockdown, Forest, and Catchy Items. I know who suggested night lockdown, but if the person who submitted the catchy items suggestion also wants to be credited, I need to know who they are.

A: No, it will not! Like the current versions, the final version will also be free to download and play. '

Besides though I don't recommend you to share this to the public though, as what from I see it has some and maybe even ALL features that Baldi's Basics + has and that also could get you in legal trouble. 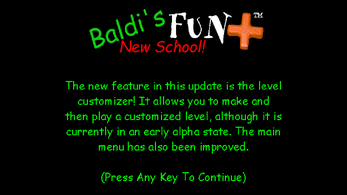 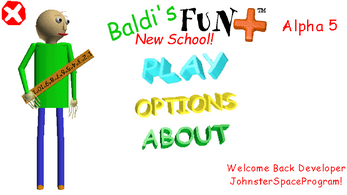 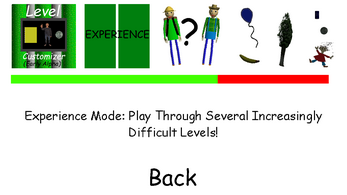 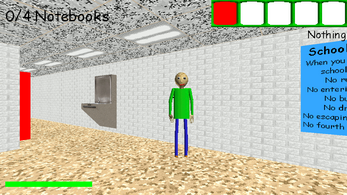 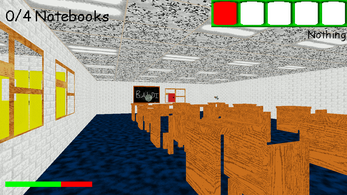 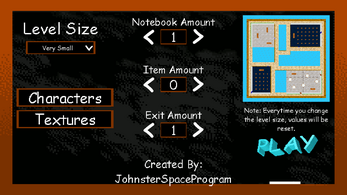 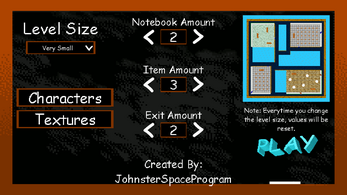 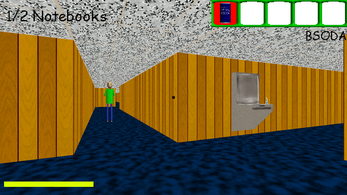 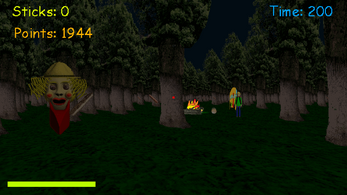 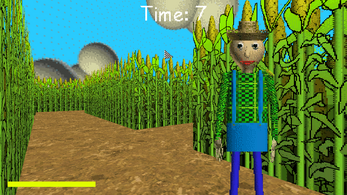