Hello, and welcome to Development Update 8 for BFNS Plus! In this dev update, I'll talk about some features and new things I'm planning on adding in future updates of BFNS Plus, as well as what versions will be coming out next. A new dev update has been long overdue, but I hope you'll enjoy reading this one as it has more than a usual dev update.

To start this off, adventure mode (previously called experience mode) will be receiving several changes. The amount of floors that will be in adventure mode will be increased from 3 floors to 5 floors. Also, the option to go on a field trip or visit matt's school store while going to the next floor in the elevator will be added. At matt's school store, you'll be able to use baldi bucks you've earned by playing through adventure mode to buy items and abilities (like super sprint, an ability that gives you a boost of speed if you run continuously without stopping for 5 seconds or longer). As for choosing to go on a field trip, the field trip you'll play will be randomly selected. If you fail the trip, you won't get anything, but if you win you'll get a special item that you can only get from field trips and not from anywhere else. Also, a save system will eventually be added to adventure mode that saves what floor you were previously playing on and continues your game from that floor if you still have lives left.

Aside from adventure mode updates, a new timescale system will be added. The way it will work is that on floor 1 of adventure mode, the timescale will be set at 1x, or regular speed. For later floors like floor 3 or 4 however, the timescale's speed might increase to 1.25x or 1.4x to make it so that completing later floors wouldn't take as long since everything would be running faster. For certain floors in other gamemodes, the timescale might be increased to above 1x as well. I may also add a challenge where collecting notebooks gradually increases the timescale. Speaking of challenges...

So, Clocker, Tomnado, and King Of Doors have already been added as new characters. Mr. Junks, TillieTale, Doctor Reflex, And TimTom will also be added eventually. However, I have some more new character ideas. The first one is Attention Gifter (name subject to change). The way he works is that he starts out slow but while you give him attention by looking at him, he gets faster. If he gets fast enough, he will go to the principal's office and leave a present there before returning to a slower speed. The present has a 30% chance to give you a random item when you pick it up and a 70% chance to give you nothing. After Attention Gifter has left a present once, looking at him will no longer increase his speed. The second character idea is The Venter (name also subject to change). The way he works is that there are vents around the school and sometimes he will enter a vent. If you walk in front of a vent he's currently in, he will come out and stun you for 5 to 10 seconds while he runs away laughing. You can avoid walking into his vent trap by looking at the vents closely to see if he's in that vent or not. If enough time passes without you walking into his vent trap, he'll leave that vent and walk around again before entering another one.

Another field trip that is planned to be added is the mining trip. In this field trip, Baldi has brought you to a mine and in order to win you have to collect ore from the mine and put the right amount of ore in each container. To complete the field trip, you have to do this several times. You would also have to watch out for mines on the ground. If you hit a mine or put the wrong amount of ore in a container, you lose a life.

A new structure called the Item-O-Matic will be added. The way it works is that when you walk in it, it has a 50% chance to either give you an item or have an error and take an item from your inventory. They would be found in classrooms and faculty rooms. A new special room called the Flooded Room will also be added. The way it works is that it is a room that is constantly flooded which slows your movement while your in it. However, they contain a special rotating vending machine. It starts out as a bsoda machine and when used on rotates 180 degrees and becomes a zesty bar machine.

Now I will move on to the final part of this dev update, talking about future versions of bfns plus that will be released. The next version of the mod I'm currently planning on releasing will be Alpha 6, which will be the final major alpha update. Alpha 6 will improve some existing things, including adding some of the features listed above. I plan on starting development on Alpha 6 after the last update for BFNS Remastered is released. Then the mod will enter Beta with the release of Beta 1 sometime after that. Several beta updates will be released, with Beta 2 adding support for Linux and Beta 3 adding support for browsers (WebGL). Once the last beta update has been released, the mod will enter the final phase of development prior to the 1.0 release, the pre-release stage.

Anyways, I hope you enjoyed this dev update, and thanks for the continued support! When Alpha 6 is closer to being released, I'll post the next dev update with more info about it!

The classic edition of Baldi's Fun New School Plus!

Add Classic BFNS Plus To Collection

Also of TimTom and Dr. Reflex models made by me

New idea for a item

Item: Fake present. Give this to the bully (He wont take anything in your inventory besides it if you have the item) and when he opens it, a boxing glove attached to a spring will come out and he'll fall to the ground, and disappear after some time. this does not break the bullying school rule.

Hey Johnster! when alpha 6 comes out, can you replace clocker's sprites with his HD Sprites from bfns remastered?

Yes, clocker's sprites will be replaced with the HD ones from bfns remastered. 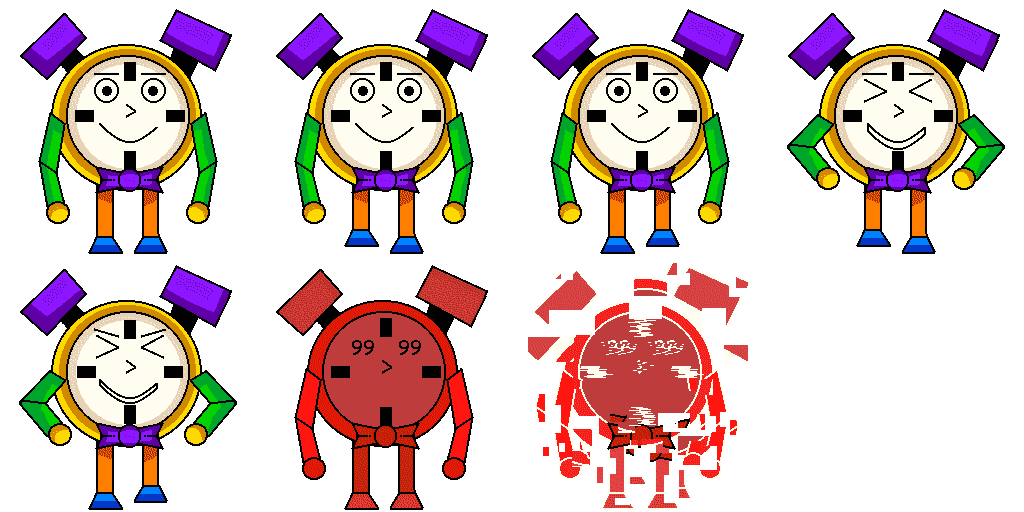 Alright, but instead of it being an option, I might make it a mod players can download.

The updated map layout for floor 1 in adventure mode has been finished! Take a look at it below. It uses a new color coded format and design. I've also included the old floor 1 map layout for comparison. If you're wondering about the seed number, its based on the number of each room type the map has in this order: Exits, Faculty Rooms, Special Rooms, Gotta Sweep Closets, Classrooms, Cafeterias, And Principal Offices. So, if a map had 2 exits, 1 faculty room, 1 special room, and 3 classrooms, its seed number would be 2110300. 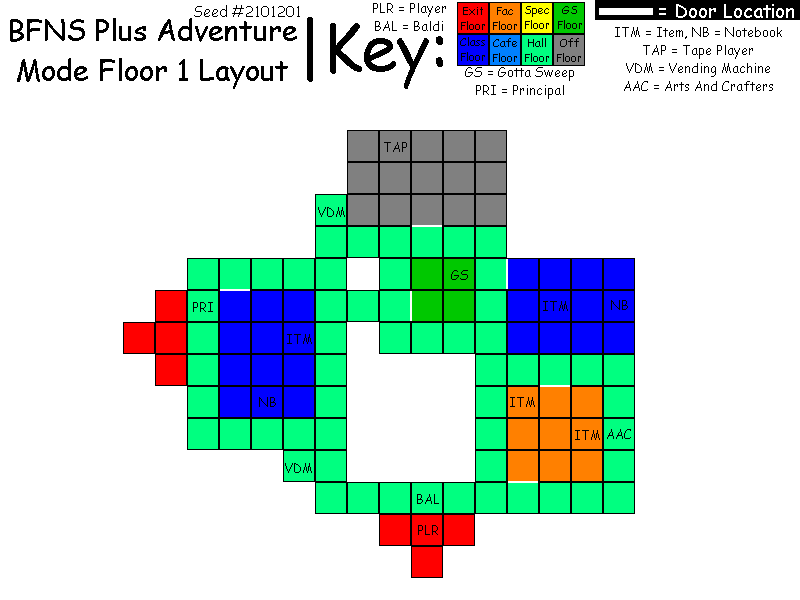 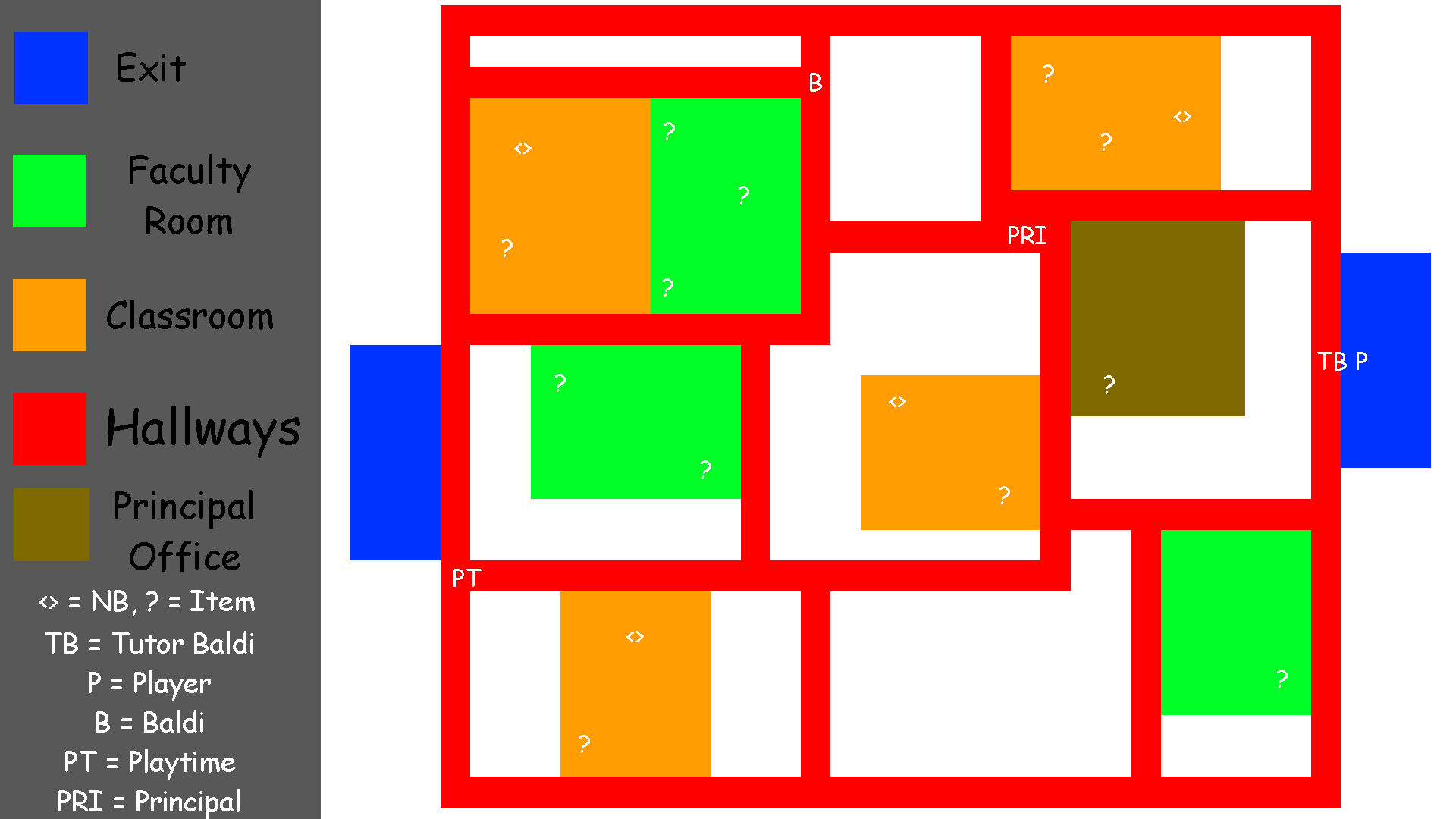 Cool mate d though! You get to customize your own baldi! I customized him with black MAP shirt and green eyes. (Android) 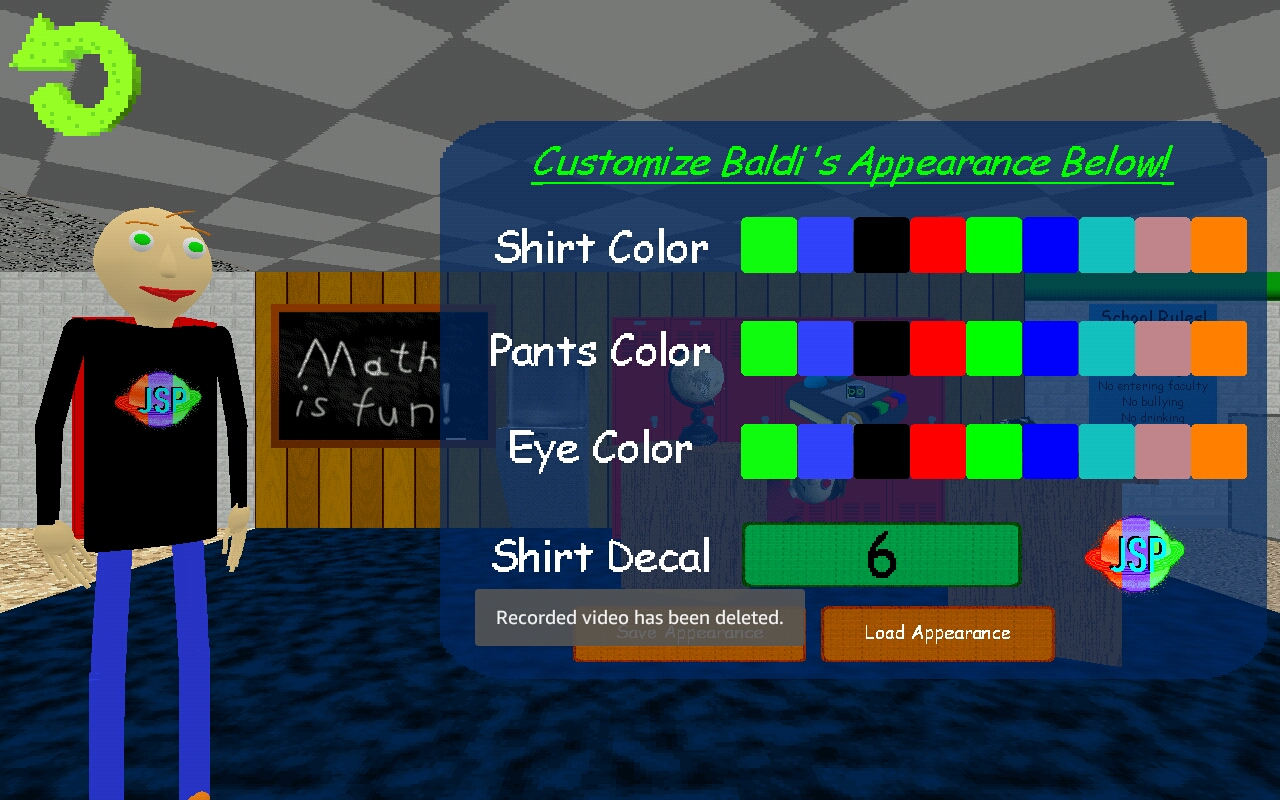 Some of the updated textures and character mechanics from bfns remastered will also be added to bfns plus!

Reply
No eating a bag of plums in the halls.1 year ago(+2)

I'm in the works of a mod for BFNS+, something like BFNS Full House Edition : it takes any open-source project on the final version of an edition of BFNS. It's certainly going to combine the pre-release, anniversary Plus and normal Plus together. I will likely not keep OCs though. Likely still possible to re-enable them, as a player of my re-mod, to spawn just by modifying Assembly CSharp in dnSpy, if the player prefers. OCs should still be left on the script in my release. If Remastered goes open source, I'll use that too, but if you prefer to not open-source that project, then I'll skip integrating remastered in my mod.

Also, same way as there's an open-source of the original camping demo, I plan to also release the Field Trip farm demo as open-source off the BFNS+ framework.

Well, I do plan on releasing the open source version of bfns remastered soon. So you can integrate remastered into the mod.

Can you please make the Minecraft add-on on your page please, for Windows and android? I don't have a YouTube channel, but I record on mobizen.

Reply
No eating a bag of plums in the halls.1 year ago(+2)

Thanks! Very much appreciated! I'll be sure to credit you for the source and new textures/music.

Alright. I'm looking forward to playing the mod when you release it, as it sounds interesting!